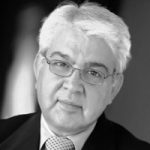 Nader Sadighi is a member of the Coordination and Executive Committee and responsible for the administrative affairs of the Phoenix  Project Inc. as well as the Coordinator of the Media Committee in this Think-Tank organization.

Nader Sadighi is a prominent writer, producer, political commentator, and broadcast journalist, a former radio and television host with one of the most recognized voices in Iranian media with years of experience.

Nader Sadighi hosted a highly rated daily prime-time talk show for years at KRSI in Los Angeles, California which offered a mix of news, commentary and guest interviews. He was also the Chairman of the Los Angeles Iranian-American Sheriff’s Advisory Council for about four years. Most recently, Nader Sadighi represented the Persian Service of Radio Free Europe/Radio Liberty in Washington, D.C. from 2008 to the end of 2018 where he secured interviews with many key newsmakers and political figures and covered the UN GA for five years.

in the early years of his career, Nader Sadighi became head of the News Department and the main news anchor of the National Iranian Television “NITV” in West Azerbaijan province. Later he was appointed as deputy editor of channel two in Tehran and, shortly after that he became chief editor of the NITV channel one network. Nader Sadighi also was a senior correspondent in the London bureau of NITV, while pursuing his higher education to get a master’s degree in economics at Middlesex University, which could not be completed due to the revolution and his return to Iran.

Additionally, Nader is the editor and narrator of the Persian version of various Emmy nominated and award-winning documentary series such as A Force More Powerful, civil resistance campaigns around the globe. The renowned American producer Steve York is the Director of this serious and the English version was narrated by Martin Sheen the famous Hollywood Actor, Director, and Producer and one of the advocates of the civil movements.

He has a Bachelor’s degree in Journalism from “College of Sciences and Mass communications” and also graduate of “School of Commerce” in Tehran, Iran. Nader Sadighi is the author of the books ”Role of Oil in Iranian Industrialization” and ”The Negative Impact of Cultural Revolution in China”. Currently, he is a contributor to several prints and online publications in the United States and Europe.

This website uses cookies to improve your experience while you navigate through the website. Out of these, the cookies that are categorized as necessary are stored on your browser as they are essential for the working of basic functionalities of the website. We also use third-party cookies that help us analyze and understand how you use this website. These cookies will be stored in your browser only with your consent. You also have the option to opt-out of these cookies. But opting out of some of these cookies may affect your browsing experience.
Necessary Always Enabled

Any cookies that may not be particularly necessary for the website to function and is used specifically to collect user personal data via analytics, ads, other embedded contents are termed as non-necessary cookies. It is mandatory to procure user consent prior to running these cookies on your website.