Recent reportage coming from Iran outlines a new image of the social movements in the country, with communication facilities such as messengers and virtual social networks playing a special role.

The “Phoenix Project of Iran” is conducting a field study into the decisive actions of young Iranian people during the Iran Protests. Hundreds of video clips provided by ordinary citizens and broadcast over the internet show demonstrations conducted by tens of thousands of people around the country during the nation-wide protests. Some of these videos include interviews with citizens who express their deep concern about the country’s economic conditions, its abnormalities and general problems of subsistence. Many of these videos were of protests that were expressions of dissatisfaction with the regime and the supreme-leader of the Islamic Republic.

At least 21 people were killed and dozens were injured in the nation-wide protests that began in Mashhad in December 2017, against extreme poverty and economic and environmental problems (specifically water scarcity). These protests continued until mid-January. Although the regularity of the protests in January 2018 began to slow down, scattered demonstrations, and especially demonstrations by various guilds, continued in various cities across the country through the rest of the year.

Our goal is to get the most comprehensive understanding of these protests and movements and to understand the causes and outcomes. The research seeks to examine and express the views, expectations, and concerns of both the supporters of the structural system of the Islamic Republic of Iran and its opponents.

Please note that these questions are designed exclusively for scientific research into civil disobedience in Iran and are only intended for the use of citizens of Iran. The main goal of this study is to examine and publish the voices of people who live in Iran and deal with the real conditions and problems in the country, and so Iranians outside the country will not be considered for the purposes of this research.

To conduct the survey on civil disobedience in Iran, please follow this link: 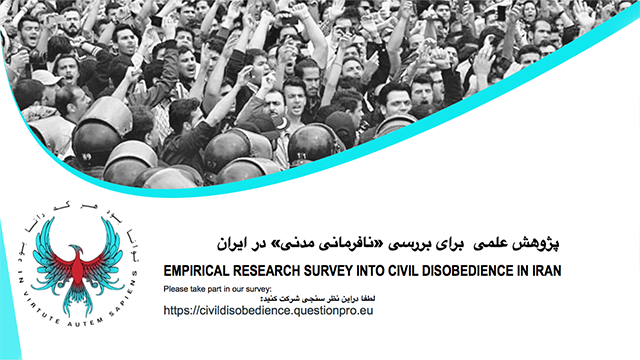